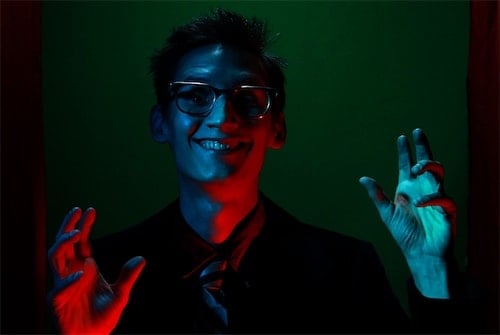 Neil Stephen Cicierega was born in Boston, Massachusetts, on August 23, 1986.His father was a programmer, which meant he was surrounded by computers while growing up. He has a brother and two sisters. His sister, Emmy, went on to become a storyboard artist for animated series such as Gravity Falls, The Owl House, and the reboot of DuckTales. At a young age, Cicierega started using a simplistic game developing program named Klik & Play. Beginning in the fourth grade, his parents homeschooled him and his siblings. He continued making amateur games, and even began creating digital music to feature in them; he soon shared his music online through MP3.com under the name Trapezoid, which was later renamed to the anagram "Deporitaz" at the behest of another band already named Trapezoid. He also began composing MIDI music fragments that were referenced in his later works.

Since 2003, Cicierega has released 10 full-length albums under his musical project Lemon Demon. In 2005, he and animator Shawn Vulliez released a Flash animated music video "Ultimate Showdown of Ultimate Destiny" on Newgrounds. The song was later included in the 2006 album Dinosaurchestra. An updated recording of the song was released to the Rock Band Network in 2010.In April 2009, Cicierega released his first four albums as free downloads on his site "neilcic.com", however they are now currently hosted on "lemondemon.com".

In January 2016, Cicierega announced Spirit Phone, a full-length Lemon Demon album released on February 29, 2016.[10] On July 10, 2018, it was announced that copies of the album on CD, cassette tape and vinyl would be sold through Needlejuice Records, who would later distribute remastered versions of Lemon Demon's Christmas EP I Am Become Christmas, as well as Nature Tapes, View-Monster and Dinosaurchestra

Cicierega was commissioned to make three songs for the TV series Gravity Falls: a theme song, a musical number for Bill Cipher titled "It's Gonna Get Weird", and the song "Goat and a Pig" (a parody of Natalie Cole's "This Will Be").Both of Cicierega's theme songs and "It's Gonna Get Weird" were unused, but "Goat and Pig" appeared during the credits sequence of season 2 episode "The Love God".One of the two unused openings appeared as a bonus track on the 2016 Lemon Demon album Spirit Phone, titled "Gravitron".